The Town of Midland is a dynamic community situated on Georgian Bay, based in the heart of one of our nation's most beautiful recreational areas.

Midland bustles in the spring and summer months as tourists and residents alike take advantage of the many opportunities. Its dynamic waterfront includes the picturesque harbour and waterfront trail for walking, biking and rollerblading. The summer season affords visits to the beautiful horticultural displays throughout Midland. Take a stroll through the hub of our downtown area and enjoy the array of boutiques, restaurants and services as well as the beautiful murals scattered throughout the downtown core.

Sainte-Marie among the Hurons

Sainte-Marie among the Hurons was the headquarters for the French Jesuit Mission to the Huron Wendat people. This world-renowned reconstruction illustrates the interaction of the French and Wendat nations. Visitors get a unique opportunity to see the earliest Canadian pioneer life.

The S.S. Keewatin was launched in Scotland in 1907. It was handcrafted in an elegant Edwardian style, similar to that later adopted on a much grander scale by the builders of Titanic. The ship plied the Great Lakes as a passenger liner for the Canadian Pacific Railway until 1965. It is one of the last surviving examples of a fully equipped vessel from a time when luxury liners ruled the waters.

In 1967, the ship was moved to Saugatuck, Michigan, where Ronald J. Petersen restored it as a maritime museum. In the fall of 2011, it was purchased by Skyline Marine Inc. It made its triumphant return to Port McNicol in June 2012, about 100 years after starting service from that location.

The Wye Marsh Wildlife Centre was opened in 1969 as a nature reserve operated by Environment Canada. It is a non-profit organization that promotes an understanding of the vital role wetlands play within the ecosystem. Staff and volunteers are dedicated to conserving the Wye Marsh and the natural heritage of the Wye Valley while providing low impact educational, recreational and research opportunities to benefit present and future generations.

The Martyrs’ Shrine is the national shrine to the Canadian martyrs. This holy and historic site honours the eight Jesuit Saints who lived, worked and died here over 350 years ago. This was Canada’s national shrine of the Canadian Jesuit martyr’s. The initial shrine was in Waubashene in the early 1900s, just 12km from the present shrine we see today. However, Father John M Filion, The Superior for English-speaking Jesuits in Canada felt the need for a larger shrine. He purchased the Standin Brothers’ farm. Hiring local seamen and lumberyard workers to help with the construction, the shrine you see today was built. They aimed for a rustic theme that led to a unique design. The interior of the shrine sports an inverted canoe as its ceiling. Over 100,000 visitors come to the shrine each year, whether on pilgrimages or school trips. This is one of only two national shrines.

Huronia Museum features a replica of a pre-contact Huron/Wendat village including a lookout tower, wigwam and full-size longhouse. The museum also houses an exhibit gallery with tens of thousands of historic artefacts ranging from photographs, native archaeology and art by members of the Group of Seven and others.

To learn more about Midland and its exciting events and attractions, visit midland.ca or drop in to the Town Dock Visitor Information Centre. 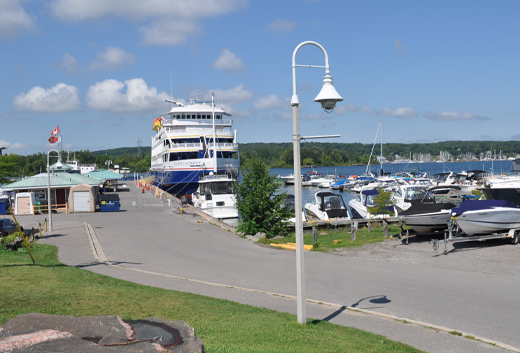 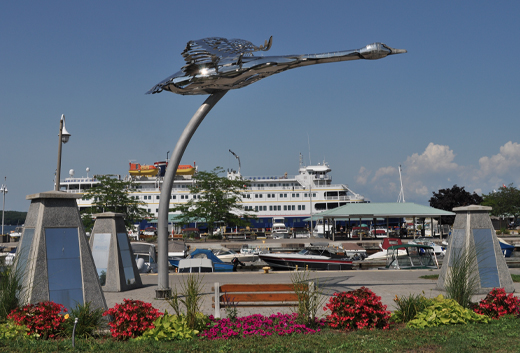 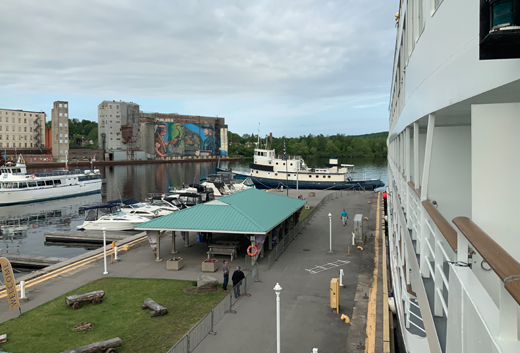 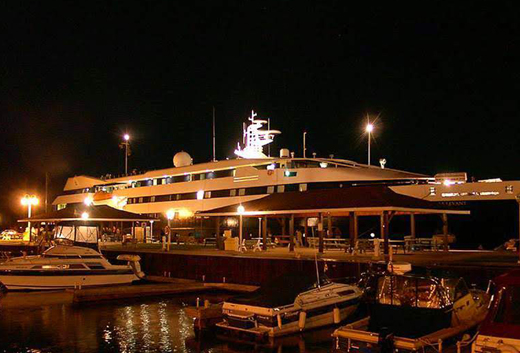